A visit by Christina Liddell not only brightened up a long stay in hospital for Poppy Smith – it transformed her life and made her dream come true, which is why she nominated Christina for the Children’s Choice Award.  “It was really hard being in hospital and not being able to do fun things because I was so poorly”, remembers Poppy. “Christina came to see me every week and played songs I liked and helped me to dance. Even when I didn’t feel well enough to dance Christina would visit me and talk about music and dancing and make me feel better.” 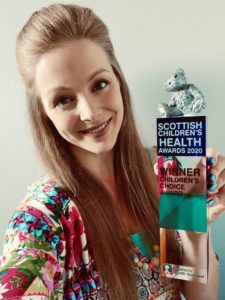 Poppy’s mum Laura says Christina’s visits were the highlight of her daughter’s week in hospital. But the dancer’s influence stretched way beyond the ward. “Christina continued to support Poppy once she was discharged, with dance lessons in the community. She also invited her to work on a show for the Edinburgh Fringe and it just had such a huge impact on her self-confidence”.

Poppy says being part of the dance show at the Fringe Festival was an amazing experience, but the adventure didn’t end there. The Dance Base teacher from South Queensferry had taken it upon herself to arrange for Poppy to meet her favourite band after asking what her dream was. “Christina also helped me to meet Little Mix and I can’t believe she did that for me.”

Meeting your girl band idols might be a fairytale for every nine-year-old, but for Christina, Poppy had much more star quality. “On occasion a child comes into your life, like Poppy, who completely and profoundly impacts you in a way you can’t quite put into words. She has to be the most inspiring and incredible person I’ve ever met. I’m so humbled that she would think of nominating me.”

Christina admits the news brought a tear to her eye and that she still can’t quite take it all in. “I’ve been blown away by Poppy’s gesture. For me, it all comes back to the amazing children and young people I have the joy of knowing and working with through Edinburgh Children’s Hospital Charity. I feel so indebted to them as they always have and continue to be such an inspiration to me. They bless my life so abundantly.”

The Children’s Choice Award is a way of saying thank you to someone who has made a significant difference to a child or young person whilst they are undergoing treatment and with this nomination, Poppy Smith would like to say: “Thank you, Christina for helping children like me.”

In deciding on Christina as worthy winner, the judging panel commented she goes the extra mile, makes dreams come true and gives extra confidence to the children. Proud Christina is delighted with the accolade and says, “this award is such a wonderful encouragement to know the work I’m able to do through Edinburgh Children’s Hospital Charity makes a difference to the lives of so many deserving children in their greatest time of need.”

The Winter edition of our magazine is now available to view online. It’s packed full of great stories, such as our fabulous TV appearance for BBC Children in Need, and meeting the awesome children’s author, Elle McNicoll. So, get cosy, grab and hot drink, and enjoy!

CLICK HERE TO VIEW PREVIOUS COPIES OF THE MAGAZINE