With less than a week to go until Scotland’s local council elections, Children’s Health Scotland is proud to be part of a group of Scottish young people and organisations that have signed an open letter to council election candidates, calling for youth voices and concerns to be heard.

Organised by the charity Magic Breakfast, the letter states that the children and young people of Scotland, and those who seek to represent them, want their voices heard. It shares their hopes and highlights key things they want candidates to think about whilst they make decisions on their behalf. Priorities highlighted in the letter include hunger, education, gender equality, wellbeing, transport, and youth services. 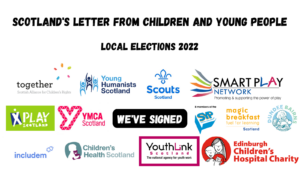 In addition to Children’s Health Scotland, the letter has been signed by 13 young people and five chief executives from organisations across the country including members of the Scottish Youth Parliament, YouthLink Scotland, Scouts Scotland, and members of Young Humanists Scotland.

The key issue of hunger amongst young people is highlighted. The letter reads “hungry children cannot concentrate in class and fall behind their peers academically”. A recent report published by Magic Breakfast shows around 250,000 children and young people are at risk of hunger in Scotland.

The letter states there should be an “equal playing field” for all young people through education. It says: “If we support and nurture all children and young people, especially those from disadvantaged areas, and encourage them into higher and further education, we could create a more diverse, skilled, efficient and effective workforce.”

Gender equality also plays a key feature in the letter. The letter calls on creating a “fairer representation for Scotland”, as well as more youth centres and outreach projects.

Mental health community-based support should be “free and accessible to all” and “local solutions” to transport problems are needed so young people can both survive and thrive in their communities, the letter states.

Grace McCabe, an 18-year-old Magic Breakfast youth campaigner and one of the lead signatories, said: “I’m signing this letter because young people are the experts on their own lives and have unique perspective to the societal issues we face today. From transport to gender equality, young people are affected by policy decisions every day. Therefore, our voices should be heard and I hope this letter amplifies them.”

Emma Rennie, 15, added: “Too many children and young people are facing hunger and it’s through listening to our experiences that we can create change. I’m hoping this letter is seen by candidates and that they commit to listening to our voices when making decisions affecting our lives.”

To read the full Letter From Scotland’s Children and Young People.

Did you know that all Children and Young People are protected by the EACH ( European Association for Children in Hospital) Charter? This sets out ten articles that describe how you can be expected to be treated in hospital, and what your rights are.